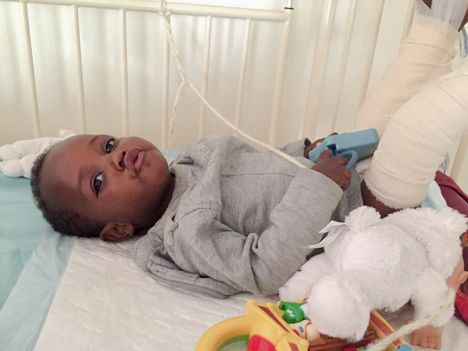 We entered the office of Apollo Tawebwa, the administrator of the Jinja Road Police Station. He greeted us warmly and with immense gratitude. With us were two of his workers from child protection services. Apollo was a young man with a warm smile and a gentle demeanor. Piet explained that their system was to never receive children brought directly to Noah’s Ark. They must always come through the police. This ensures that the proper processes are followed and that the child’s rights are protected. It’s not a given that even in an extreme case such as the one we were faced with that the child will not be returned to its family.

Piet’s vision is for children to be with their families. He explained to Apollo that God invented families but didn’t invent children’s homes. Wherever possible they will search for relatives and assess whether there is a viable and safe situation for the child to enter into. They (Noah’s Ark) work closely with the local authorities and provide their own recommendations based on an assessment of each individual situation. If there are no safe options for the child, they will be welcomed to Noah’s Ark and become part of the family.

As the social worker was questioning Apollo and his team, Pita asked me if I would be willing to give my name. Assuming this was in regards to the legal matters at hand, I immediately agreed, thinking I was to be a witness or something like that. At this, however, Pita smiled, turned to the child protection worker and said, “The baby’s name will be Darren.”

Up until this point I realized I had not really looked at the baby’s face. When we arrived he had been facedown and in all of the activity I had not had the chance to see him fully. Now I stood up to meet my namesake. He was awake and alert, cuddled in Pita’s arms and turned to face me as I came over. Huge, almond-shaped and profoundly sad eyes greeted me with a dazzling beauty. His features were fine and symmetrical, his skin a beautiful rich brown. A truly beautiful boy.

Our adventure continued in the opposite direction as we roared back to Mukono, siren blaring and traffic leaping out of our way. Pulling up to a derelict building that looked half finished, I realized we were at the hospital. Piet strode confidently into the radiology department, which consisted of a single room with a desk and half wall behind which sat the x-ray machine. Piet informed the technician behind the desk that we had an injured baby and would need an x-ray immediately. The technician told Piet he must first see the doctor, get his recommendation and them come back for the x-ray. Piet countered with, “I am a paramedic, I have already examined this child, and I demand that you x-ray him immediately. His leg is most certainly broken.”

Before we left the compound, Piet had quickly changed into a white shirt. Now I realized the reason for this change of clothes. He must appear to be an official medical professional in order to get the results he needs.The effect was immediate, and the technician received the child and began the x-ray procedure.

The remainder of our day was spent travelling to Kalagala to supervise a construction project that Piet had initiated some months past. When we returned to the compound for supper, Darren was in their living room in a crib, and the orthopedic surgeon from Mukono hospital was devising a traction system to stabilize his leg, which as Piet suspected was badly broken at the femur.Pita pulled out the x-ray and said, “Even if you have never seen an x-ray before, you will know immediately that the bone is broken.”

Somehow his femur had been broken clean in two near the top, and the two broken ends were overlapping by about a half-inch.The baby would need to lay on his back with both legs straight up in an improvised traction system, held up by the ankles and secured to the top of the crib. The weight of his legs would slowly pull the bones into alignment, and the doctor estimated this would take about two weeks, at which time the leg would be put into a cast.

Darren lay calmly as he was treated, happily eating pieces of banana fed to him by Tamar, one of the resident doctors at Noah’s Ark. I knew that he could feel the love and security that now surrounded him, and I marveled at the miracle of love I had been part of that day.

For more information or to donate